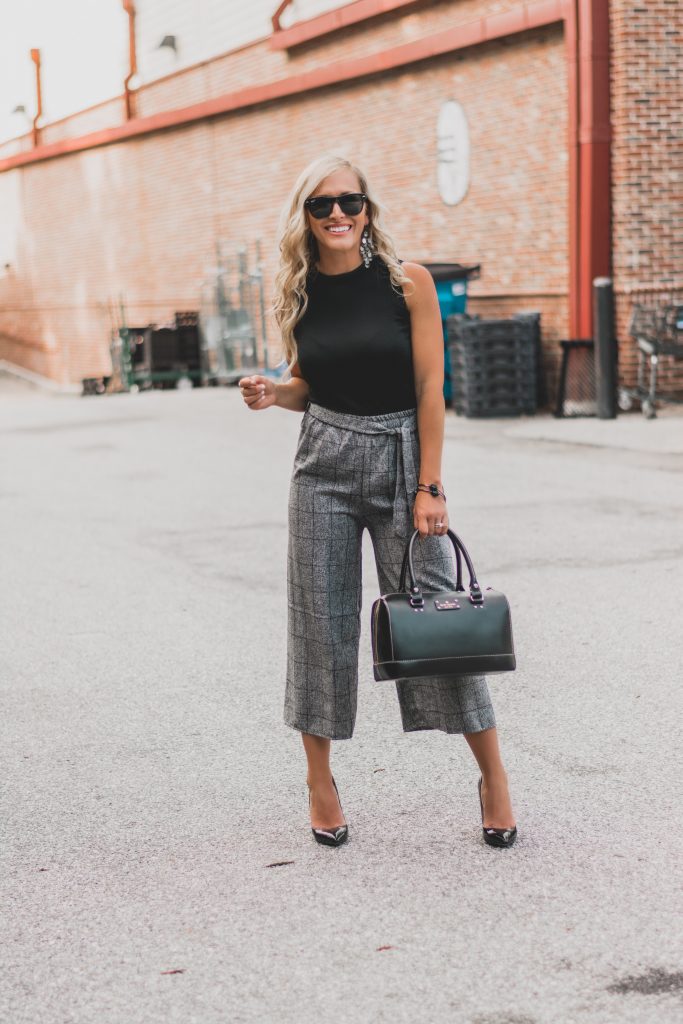 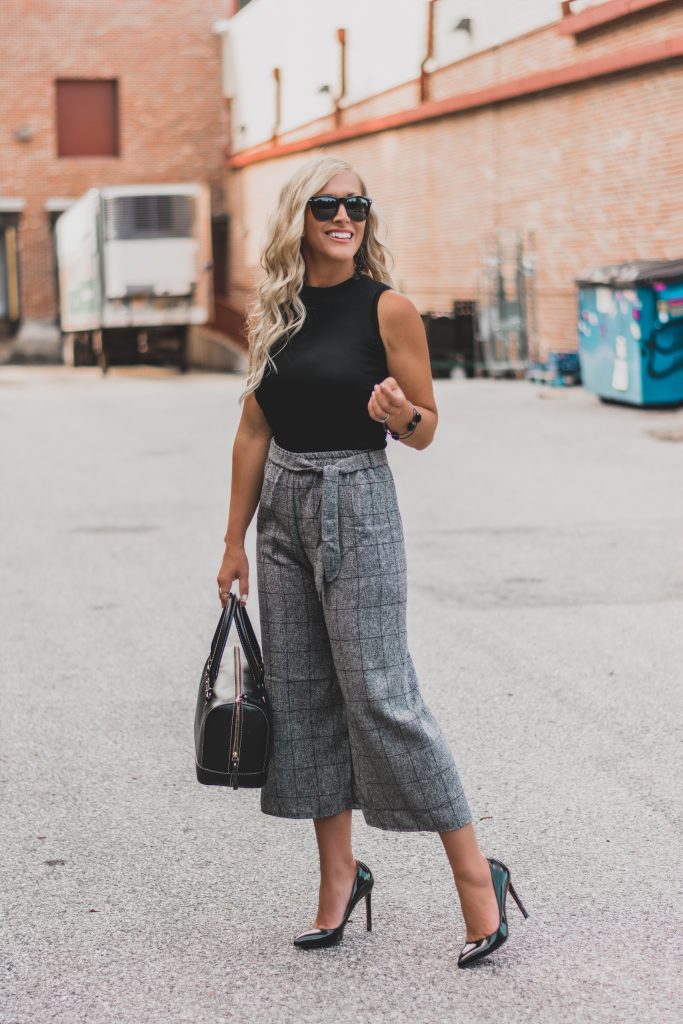 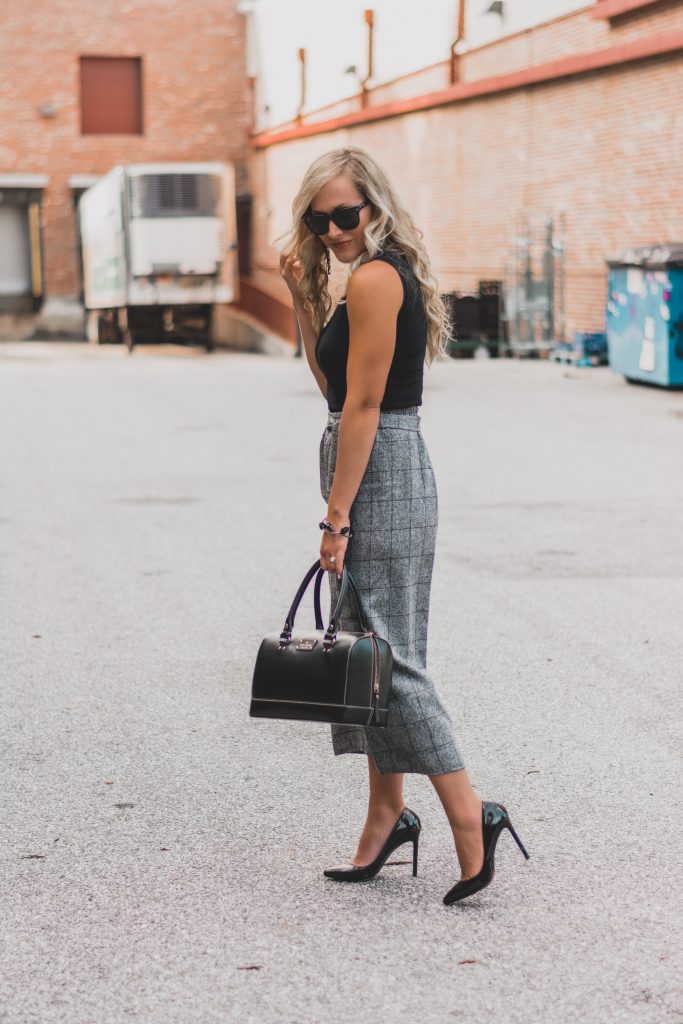 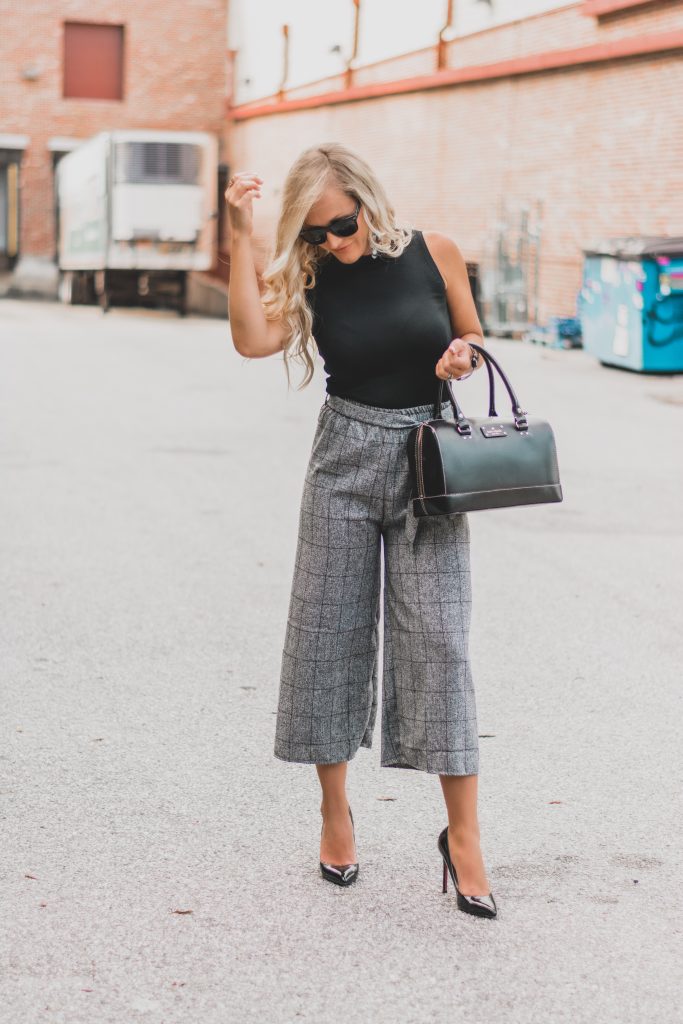 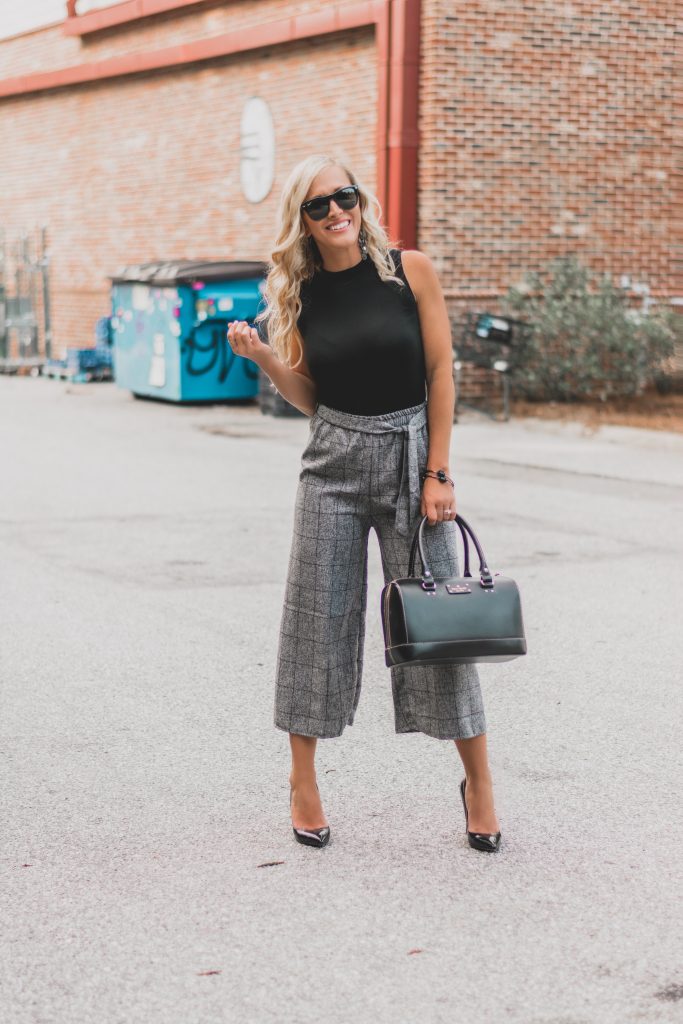 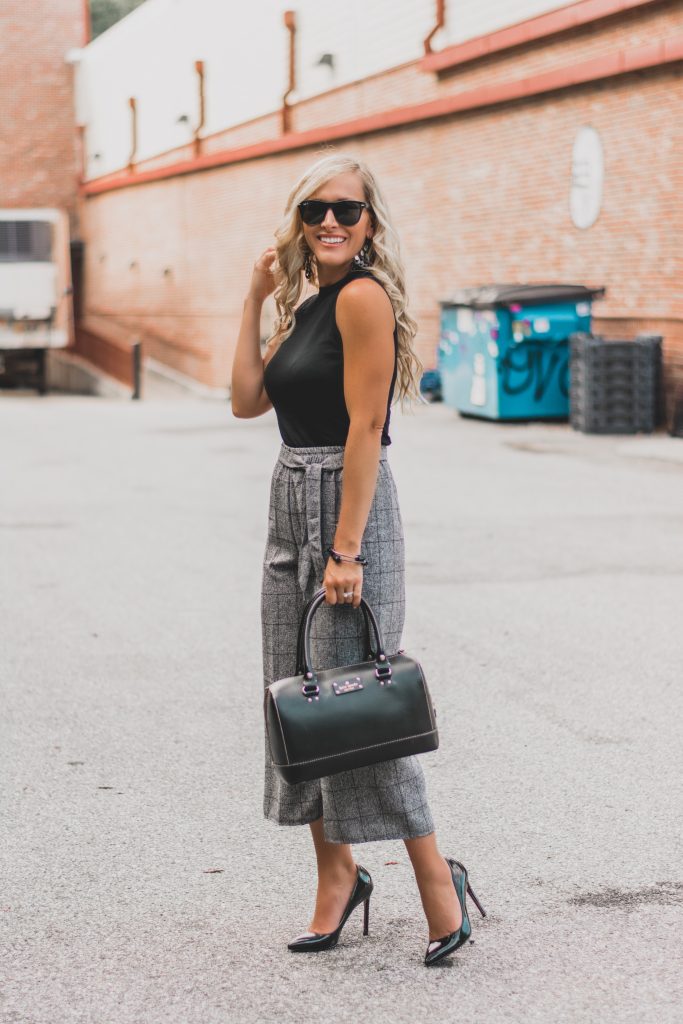 I really need to figure out some new poses….it’s like I have a brain fart as soon as I’m in front of the camera and forget how to work my appendages.  PS; These pants are only $8!!  Yes, EIGHT!!

Happy hump day!!  JK….I know it’s thursday, but if you’re looking at the post title it’s pretty clear I meant to wrap this post up yesterday….oops!  Unfortunately I got a little busy with ‘Operation Rat Relocation’ and had to play catch up with some brand emails and another project I’m working on, so I only got as far as editing the photos before I had to switch gears.  And if you’re wondering what in the hayELL I’m talking about, check out my “Random Musings” story highlights (you’ll probably wanna skip to the end-ish of the highlights).

Now on the topic of Werk Werk Werk Werk Werk, I’m toying with the idea of trying to do a weekly career wear series bc I feel like that’s a slightly underserved aspect of the blogosphere, yet office attire is probably what 75% of the adult female population are wearing as they’re scrolling through an endless feed of athleisure and everyday casual looks.  Plus I kind of miss dressing all profesh (vs my usual lotd of greasy hair paired with whatever mismatched pajamas or workout wear I happened to pull off of the giant pile of unfolded laundry).  So please let me know what you all think, and if any of you would like to see some more business-y type looks sprinkled in with my usual;)

On the topic of greasy hair and basically looking unfit for public viewing a majority of the time, I want to touch on something that has been a point of concern for years regarding the aspect of the whole social media “highlight reel,” and how some women find their feeds to be damaging to their psyche.  I recently came across a thread in a “women supporting women” focused facebook group where the OP voiced how tired she was of Instagram Influencers, and after a tiny, somewhat misguided rant, she basically ended the post with “who’s with me?”  I totally understood where her sentiments were coming from, as I occasionally have similar thoughts.  This is sort of an aside, but the irony of her post (IMHO) is that she posted it in a group founded by a hugely popular social media influencer, who is alllll about spreading positivity and kindness, but I digress.  Anyhoo…..this post lead to a flurry of comments, most of which included an “Amen!”  or “PREACH!”  I get it…..the influencer market really is quite saturated now, and while we’re on that topic…..who the hell came up with the term “Influencer” for this profession?  Ugh….I can’t even with it, but I digress (again).

While the thread irritated me to no end.  Mostly bc of where it was posted, which I found pretty offensive and insensitive to the group’s founder.  Not to mention it was directly in conflict with the group’s admin rules.  But also because many of the frustrations expressed were based on completely false assumptions.  So even though this was not the appropriate place for this woman’s rant, I did learn a valuable lesson, which is a lot of people don’t understand that….just like everyone else in our lives….bloggers, or “Influencers” (ugh…I cringe) are just posting highlight reels too.  Except these highlight reels often involve legal contracts and posting requirements, and they’re not AT ALL aimed to make anyone feel inadequate, or dissatisfied with their lives.  Rather they’re meant to inspire, in much the same way as flipping through a fashion magazine.  Most of us bloggers (or “Influencers” if we must) don’t live a glamorous life.  Frankly, most of us are looking pretty freaking homely like 65% of the time as we sit behind our laptop screens planning and creating.

Sure, there is a top 1% among every segment of the population, including bloggers.  But truly, even the HUGELY successful bloggers who are posting the most incredible photos and seem to live a life filled with blogger brunches, first class seats to faraway exotic lands, and holidaying in the Hamptons or Ibiza are actually working their butts off.  Almost none of these trips are actual vacations.  Everything is scheduled out for them according to pre-negotiated contracts, they’re planning and coordinating photo shoots, meeting with PR reps, editing photos, creating curated content for social media, double checking that they’re fulfilling all their contractual obligations….and in between all of this, they’re doing what nearly every other office employee or business owner does….responding to endless emails, and coordinating future projects. These lavish looking “vacations” are business trips, plain and simple, and the work never ends, like with many jobs.  Of course, some of the most famous bloggers have a team of employees to help out with a lot of this, but that doesn’t mean the face of that team (the blogger) is working any less than the average successful blogger.  Or the average CEO for that matter.

Now with regarding to sponsored posts, I’d like to think that most bloggers are as picky as I am about who they’ll partner with, but sometimes momma just needs to bring home the bacon so she can feed her kids and pay the electric bill, or a young college student needs some extra cash so she doesn’t have to dine on ramen noodles for another month.  So while I personally go out of my way to make sure anything I agree to promote aligns with me personally and authentically, and as it turns out about 95% of the offers I’ve received don’t, I totally understand why someone may accept an offer that doesn’t really sync with their brand.  But guess what?  The good news is that those posts are conveniently tagged for the rest of us as “sponsored” or ‘ad” or “partner,” so you know that you can either ignore those posts if you don’t like them, or at least take them for what they are….paid advertisements to create awareness of a product, or service, or event etc etc.

Like I said, I hope most bloggers are as discerning as I am when accepting partnerships, but not everyone is in the same financial situation, and sometimes desperate times may call for more desperate measures.  And as with any other recommendation, whether it be from a co-worker, friend, or your 90 year old grandmother, we all need to do our own due diligence before running out the door to buy one of “Oprah’s Favorite Things.”  I take that back, I trust Oprah, so I’ll pretty much do whatever she says and not look back.

Anyhoo….like I said, the good news is that the IG posts that are sponsored are basically red flagged for us, unlike in magazines, where products are recommended in articles and for some reason nobody really thinks about the extensive contract negotiations and money changing hands behind the scenes before that magazine hits the stands.

Which brings me to another point.  Who subscribes to magazines anymore?  I used to, but with the invention of instagram, and the birth of this whole new industry of influencer marketing, I learned that I much prefer to see your average, everyday moms, wives, college students, etc of all shapes and sizes sporting the latest trends, rather than a celebrity or supermodel in a magazine.  And I don’t think I’m alone here, otherwise this influencer (gag) industry would never have taken off.

So the bottom line is we shouldn’t get too offended by perfectly edited photos and/or sponsored posts.  I know sometimes our IG feeds end up inundated with similar posts promoting the same thing, but the reason for that is usually because a brand is running a big campaign with several “influencers” and they’re all required to post within a certain timeframe.  It is what it is, and we can all just keep on scrolling along.

There are all sorts of ways to earn a living nowadays, and I think we should be celebrating that, and the fact that women can truly pave their own way to success, while perhaps being able to spend more quality time with their significant other, or take a break for a few hours to go volunteer in their kid’s classroom, care for an ill relative, or totally ace their college finals (rather than not having sufficient time to study or sleep due to an inflexible work schedule).  These women are calling their own shots, and kicking ass and taking names while doing so.  And I think that’s just really freaking fantastic.