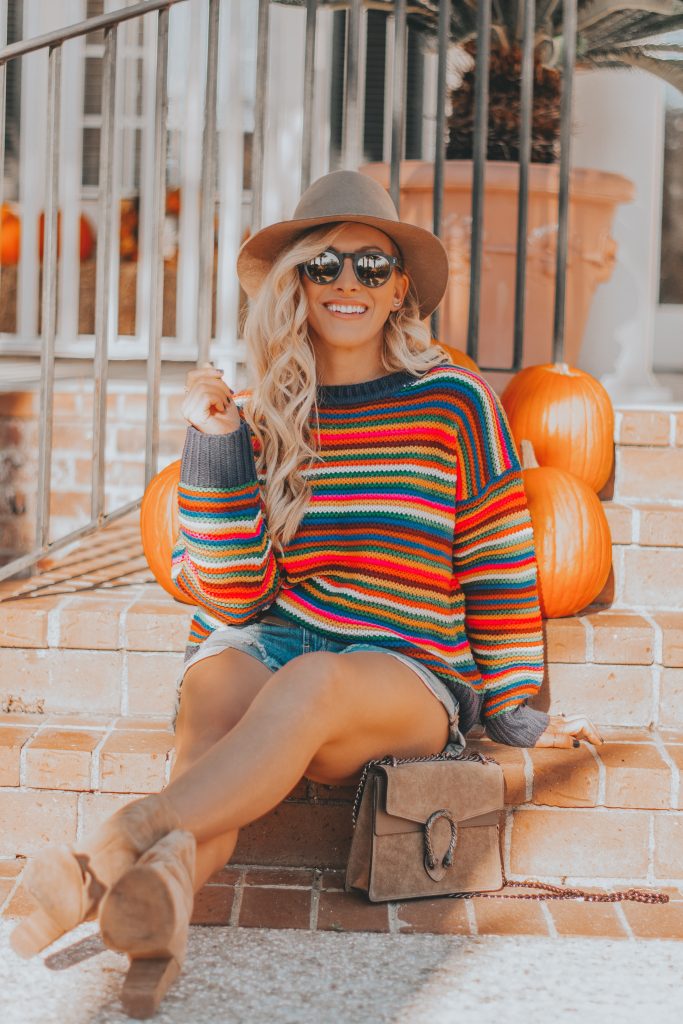 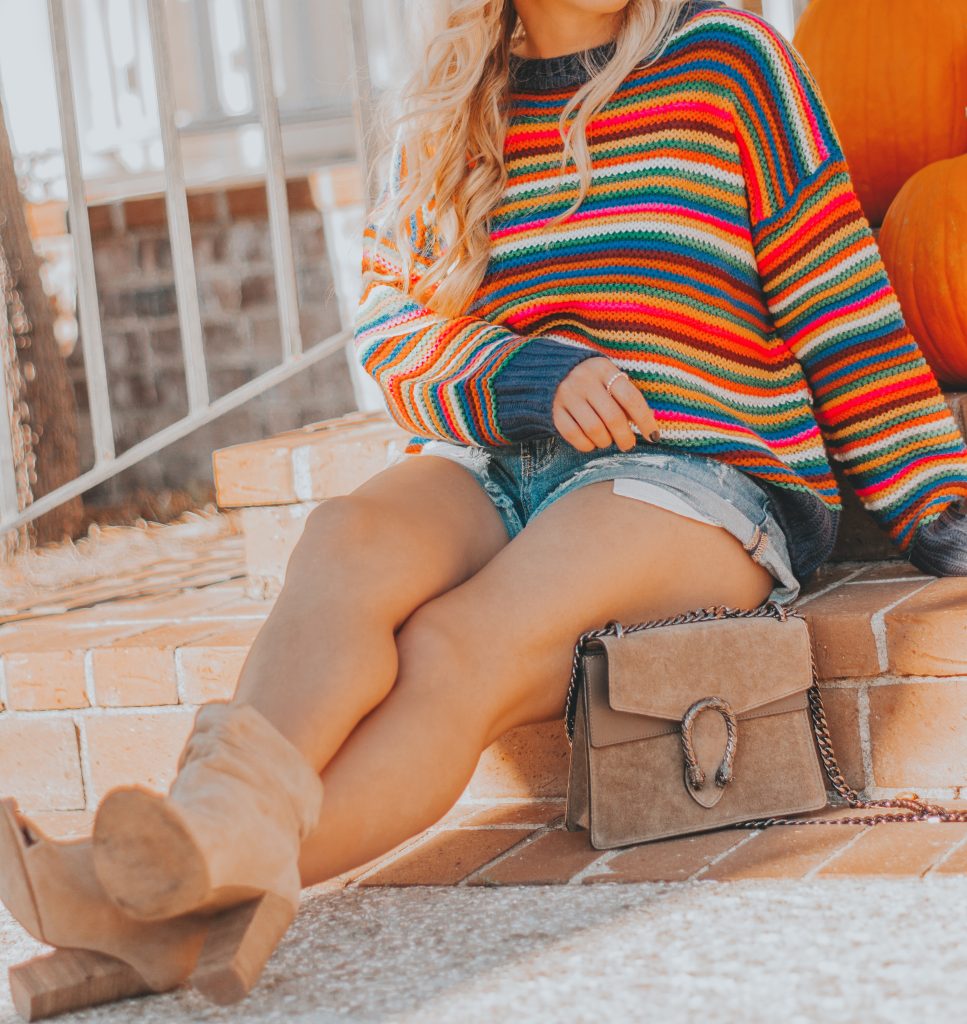 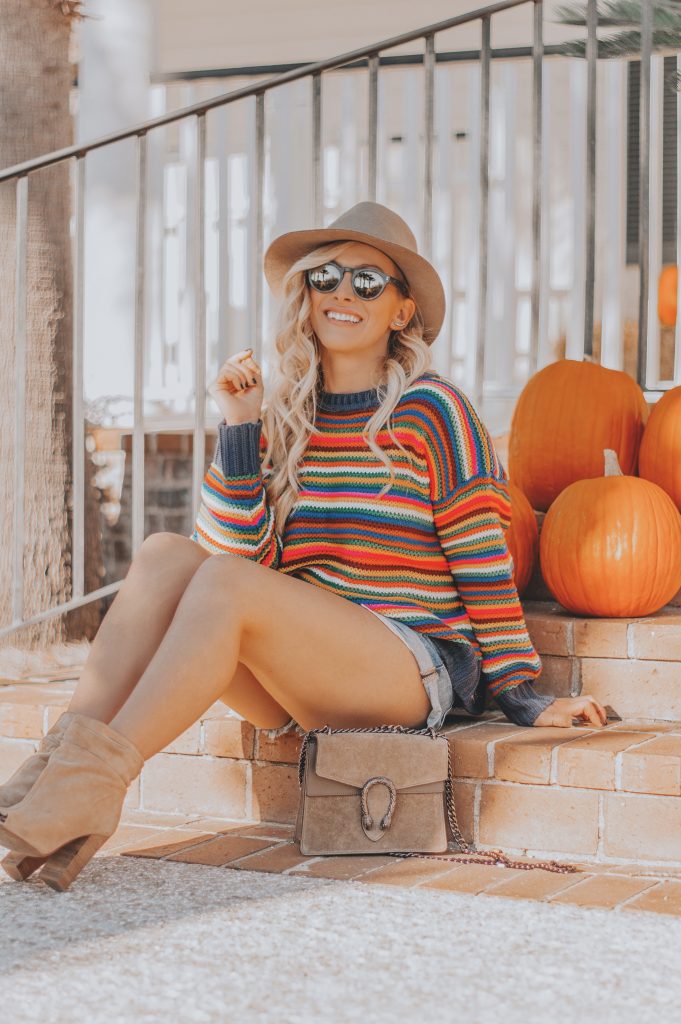 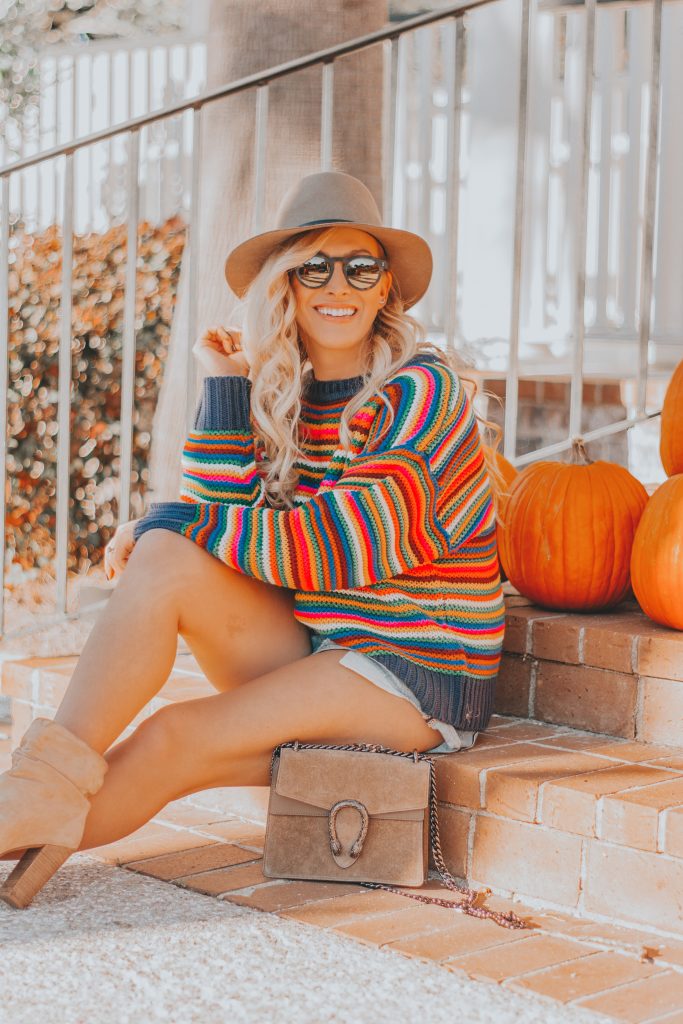 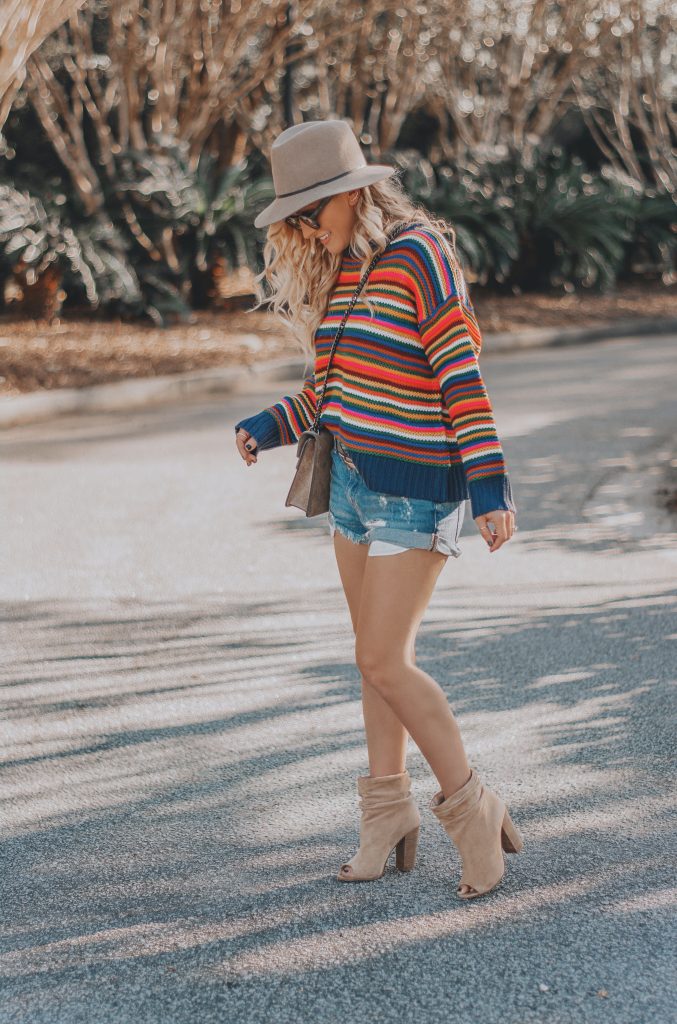 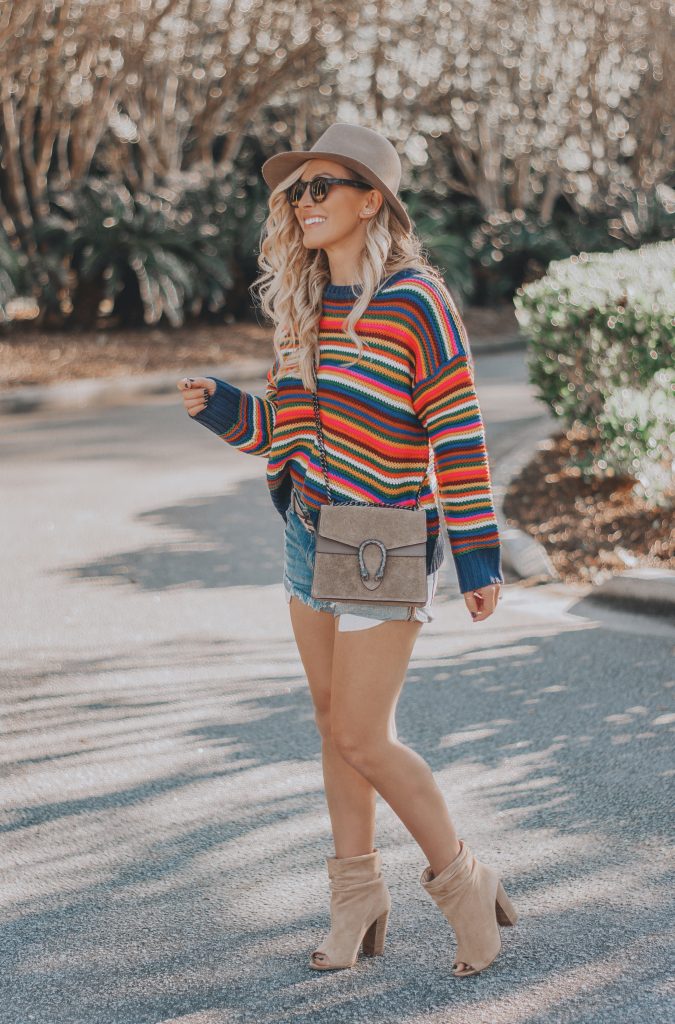 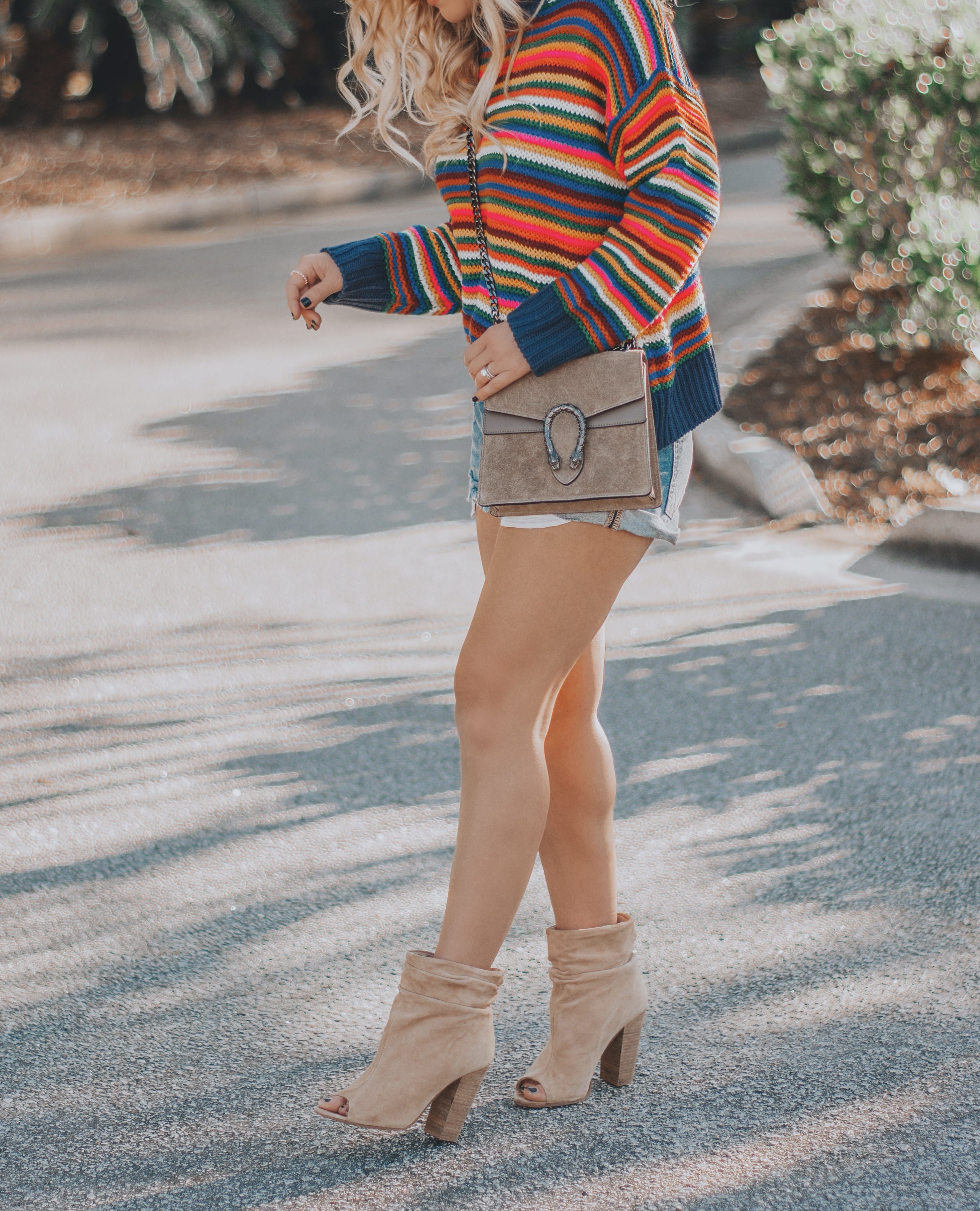 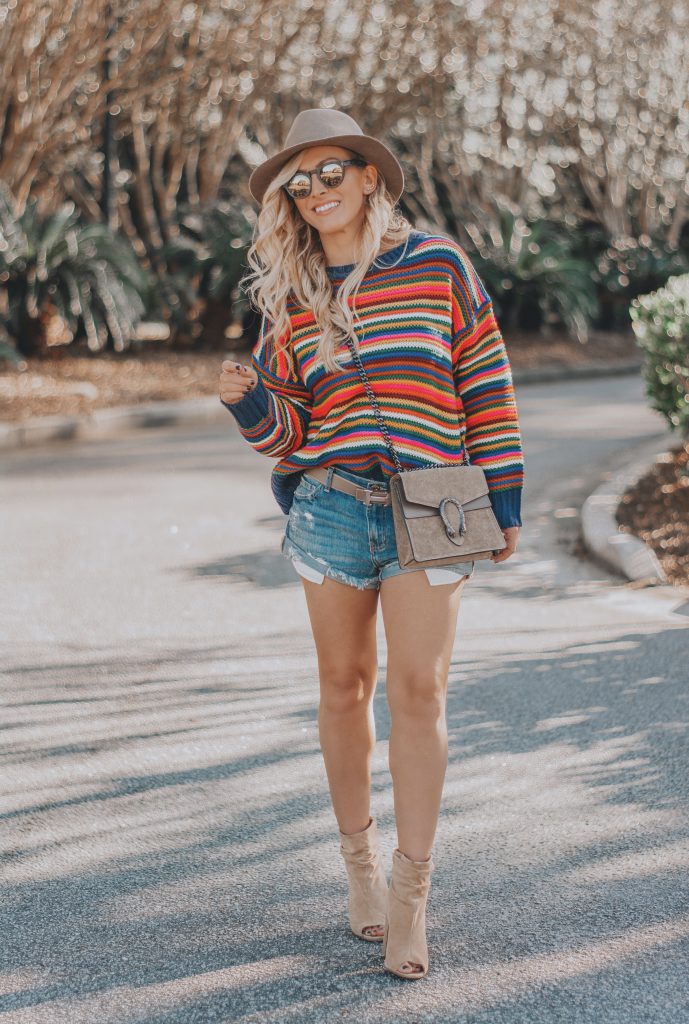 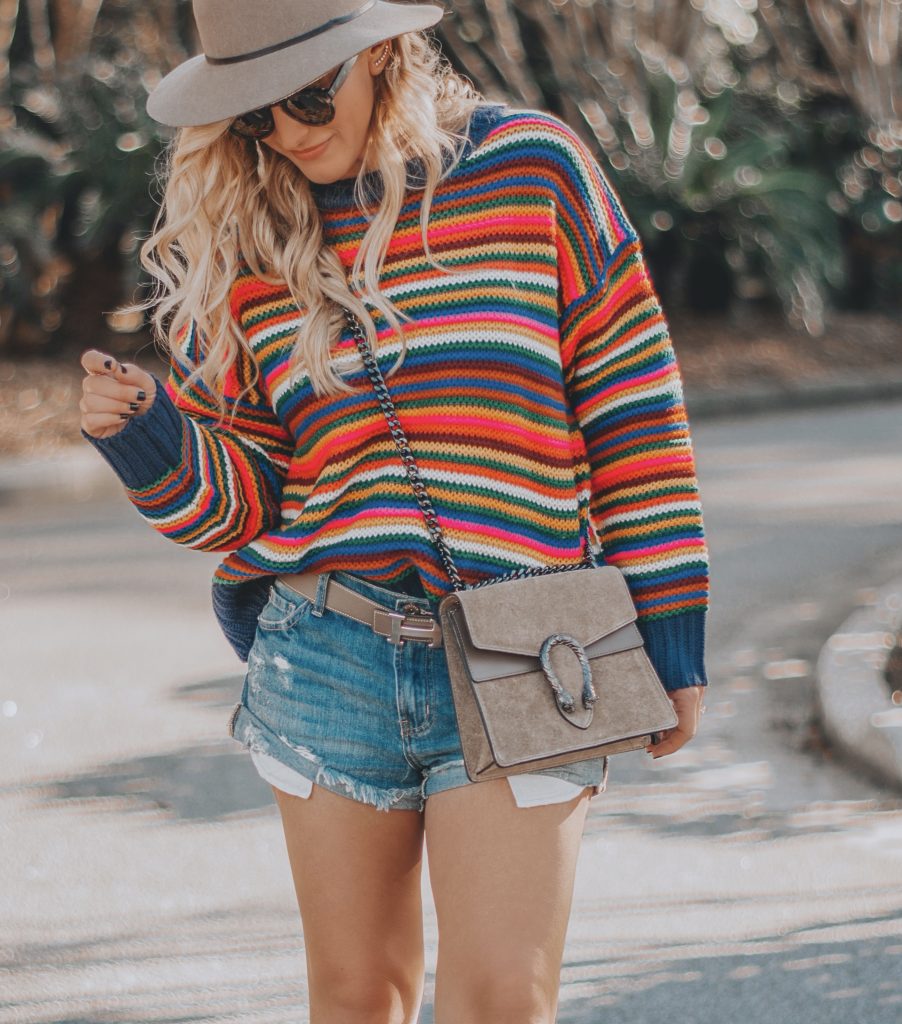 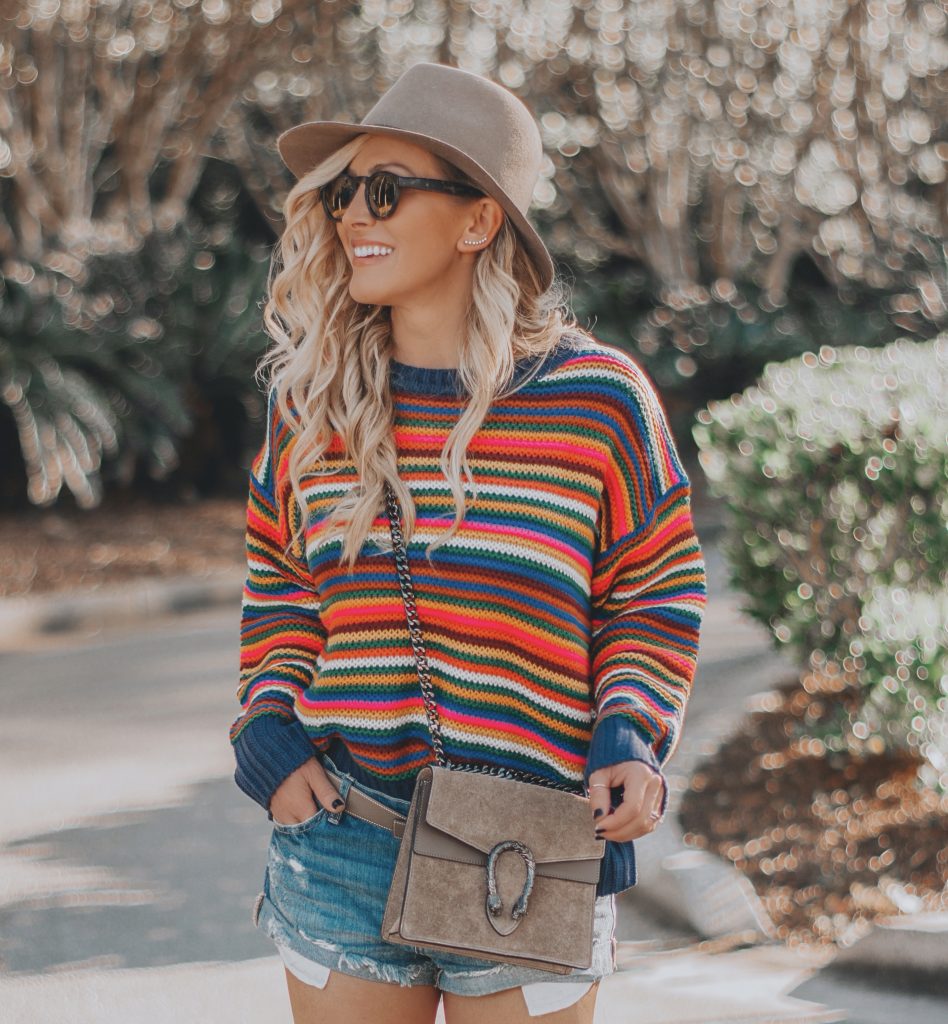 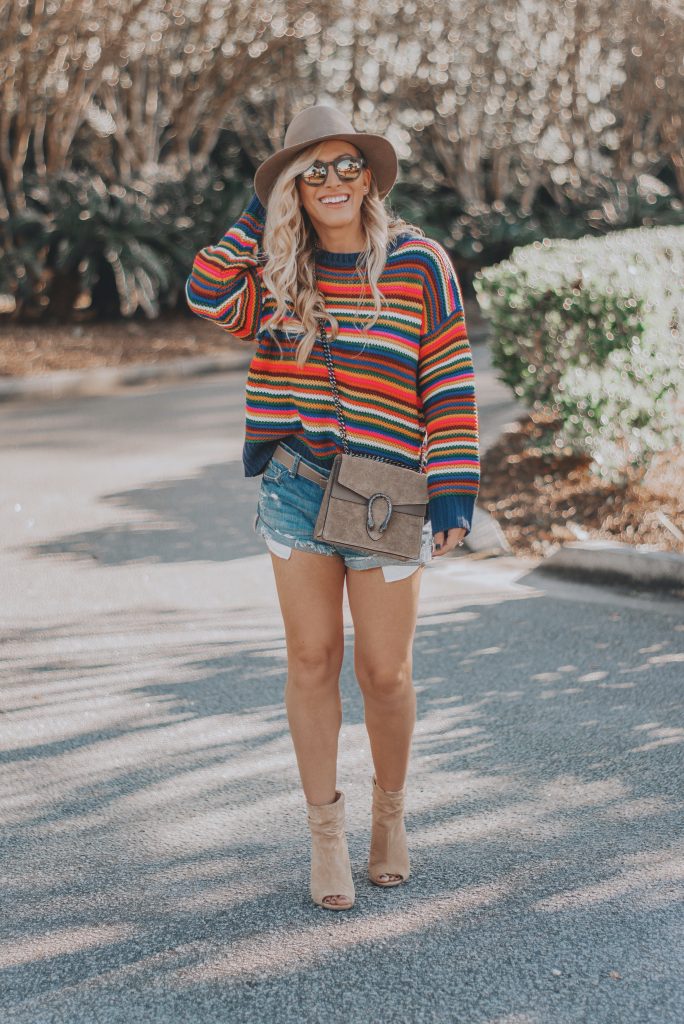 I have a tiny confession to make.  October is coming to a close, and the only pumpkin I’ve purchased is in a can and goes on top of our dogs’ food to help them poop.  I haven’t even bought one of those trendy white pumpkins we’re seeing all over our insta-feeds.  I mean, am I even a real blogger?!  Don’t answer that.

Over the weekend we stumbled upon some pumpkin decor conveniently set up at a random spot we occasionally use for shoots, and thankfully nobody was around so we took full advantage of it.  So here I am officially checking my obligatory blogger fall pumpkin duties off of my to-do list.;)

Luckily, the pumpkins just so happened to perfectly match this new rainbow striped sweater I just got from Forever 21.  I’ve been loving the colorful sweaters I’ve been seeing all over my insta feed lately, so I decided to jump on the bandwagon.  Even though I’m generally more of a super basic, neutrals type gal, it’s great to mix things up a  bit every now and then.  I especially love the idea of adding unexpected colors to my wardrobe this time of year since everything kinda starts looking a bit drab once the leaves start dropping, and the grass goes dormant.

My sweater was just under $25, it’s super warm and cozy, and the perfect length for a little french tuck action.  I’ve linked a few other fun colorful sweaters that I’ve added to my shopping cart as well.

These pistola denim shorts were a fabulous deal when I got them about a month ago, but now they’re practically giving them away (seriously!).  I bought these white ones too, and I am thrilled with them both.  I’ve found it somewhat challenging to find denim shorts cut like this at a good price point, but these are exactly what I’ve been looking for and they were a steal, so win-win;)

Steering away from fashion for a moment.  I’ve decided to switch things up a bit and share a little monthly recap.  Let me know what you all think!

My dear friend recommended the comedy “I’m Sorry,” which is on Netflix now and I haven’t laughed so hard at my TV while watching anything other than The Office or Parks and Recreation in years.  Michael liked it too, and he’s usually not a huge television comedy fan if that tells you anything.  Catch the trailer here.

On a dark and depressing note, we also caught The Haunting of Hill House, which is a Netflix original series and sooooo sooo good.  It was scary, but since it’s a mini series, they didn’t have to resort to cheap tactics and were able to fully develop each character and a meaningful storyline.  Here’s the preview.

We also caught the second season of the true crime docu-series Making a Murderer, which was just as intriguing as the first season, and equally as dissatisfying.  Still worth a watch in my opinion.  It further confirmed Michael’s greatest fear of being convicted of a crime he didn’t commit.  I don’t know if I 100% believe Avery is innocent, but in my non-expert opinion it seems, at the very least, a new trial is justified on the basis of ineffective assistance of counsel alone, not to mention all the Brady violations.  I’ve clearly been listening to way too many crime podcasts….

Speaking of crime podcasts….I’m a bit late to the game but I’ve just finished season one of Undisclosed, which features three attorneys (including Rabia Chaudry, the family friend who was interviewed in Serial) who meticulously analyzes the case against Adnan Syed.  If you haven’t listened to season one of Serial, you should definitely start there.  Undisclosed really digs deep into the case, sometimes painfully so.  So if you’re not interested in our judicial system and its shortcomings, or in the state’s (weak) case against Adnan, you probably won’t find Undisclosed to be as riveting as I did.  If you were riveted by Serial, you’ll probably find Undisclosed to be pretty mind-blowing.

I recently discovered a cheap flight hack appropriately named Scott’s Cheap Flights.  Basically they have a team of people who scour the internet searching for cheap fares, which are sometimes “mistake fares” that don’t last long.  They then send you an email with instructions on where to look and how to book the fare.  I’ve been using the free version, and unlike most other cheap flight sites, they’ve had a good amount of deals from our tiny airport in Charleston.  For instance, recently there were several dates available from Charleston to Milan in the $600s round trip from October through May 2019.  A lot of times the cheap fares have long layovers, or other disadvantages like sketchy airlines, but these cheap fares were on major carriers with great itineraries.  They’ve had great deals to Athens as well, and we’d LOVE to return to Greece;)

We’re hoping to plan a trip in the next year with two of our dear friends that we just went to Mexico with a couple months ago.  They travel often to the Caribbean, but this will be their first time in Europe.  So hard to narrow down where we should go when you want to discover new places, but also want them to experience all the great places we’ve already explored.  Let me know if you all have any ideas;)

Really enjoyed attending the Charleston stop of Reese Witherspoon’s “Whiskey in a Tea Cup” Book Tour (okay, so I just double checked, and technically this was in late September, but it feels like it was just yesterday;)).  Reese is tiny, and from my nosebleed section seat she appeared to be merely a spec of blonde hair on a large stage, but her personality is truly larger than life and I could’ve listened to her telling funny stories about her childhood for hours.  Unfortunately, she only spoke for about 45 minutes, which was a bit of a let down, but I’m still glad I went.  Her book makes for the perfect blogger-friendly coffee table book too;)

Michael and I had the pleasure of attending a “Welcome to the Family” party to celebrate his cousin’s finalized adoption of the most adorable baby girl.  She and her husband have been desperate to start a family since before I met Michael, and I couldn’t be more happy that their dreams of becoming parents have finally come true in the most beautiful way.

We had a great time at the Victory Cup Polo Match, despite that whole lunch/food snafu that I mentioned in my previous post.  Next year I’ll be sure to smuggle some snacks in my purse;)

I was super excited to finally meet the beautiful faces and brains behind Ivy Rowe Boutique of Mount Pleasant.  Christine and Courtney founded Ivy Rowe just this past May, and they’re already kicking ass and taking names.;)  I’m excited to partner with them on an upcoming giveaway for a gift card, so stay tuned!  If you don’t live in the area, don’t worry you can still shop online!

New in the Closet

These gingham pants are just as cute in person as they are online.

Also thrilled with these dupes of the Steve Madden Reece sock booties.

IN LOVE with these moto jeans from Ivy Rowe Boutique (size down one or two sizes)!  They’re just under $50, so a great deal on quality denim.  And they’re sooooo comfy!

I love a good plaid coat, and this one and this one are such great budget buys (UNDER $30!), and they look great in person (size up!).  I’ll be sharing each of them in a blog post soon!

I had my touch up (second) appointment with Terra, the owner and microblading artist of Ultra Brows in nearby Summerville, and I cannot wait to see the final outcome of her incredible work AND to officially have brows again!;) . I’ll be doing another blog post about my experience and the results after I’m fully healed, so stay tuned!  Also, if you’re local and looking to get a new set of brows, Terra said she’ll be running a great Black Friday discount (not sure of details yet, but keep an eye on her socials and website for info!).

I also had the opportunity to get my hair and makeup did by Jasmine, who’s the talented beauty and brains behind Alter Image in Charleston.  Jasmine will be generously gifting a hair and makeup glam sesh to one lucky local, so keep and eye out on my IG for this fun giveaway.  She’ll come out to your home, so it’s the perfect opportunity to treat yo-self without any hassle;)

On the Home Front

Just scored two of these sofas on sale for $620 total.  We were nervous about getting upholstered sofas with all our dogs, and considering all the dog sitting we do (vs leather, which I love being able to wipe down clean).  This is also why we didn’t want to spend a lot of money on furniture (so we won’t want to cry when they need to be replaced in a few years).  Our current crew is potty trained, but accidents do happen with little dogs.  So in order to prevent a cushion from being forever tainted by a vindictive little frenchie monster, I invested in this $17 roll of industrial plastic wrap, and as soon as our new sofas were delivered I unzipped the cushion covers and mummied up the foam inserts with the plastic.  So if an accident ever does happen, all I have to do is wash the cover, and the foam is protected and remains stink free.  Winning. 😉

I’m waiting for these accent chairs in the mocha color to be delivered.  They’re pretty small, which is what we need.  I’m excited to see my vision start to come together and really hoping it turns out the way it looks in my brain. =\

I recently ordered this grout pen to freshen up the grout in our master bath.  I’ll let yall know how it goes 😉

I shared to my stories last week that I was making a couple chunky knit blankets for the living room, which prompted a lot of questions about how I did it.  This is a good tutorial showing just how easy it is to make your own, and this is the exact yarn I used.

Our nine year wedding anniversary next month.  I CANNOT BELIEVE we’ve been married that long!

The Holidays, and all the great sales!

The Holiday drama, and all the traffic and crowds =\

I need to schedule Gracie’s palate surgery, and I’m a nervous wreck about it bc Gertie had some complications following her palate surgery and it scared me to death!

Hope everyone had a great kick off to fall and cheers to a fun holiday season!