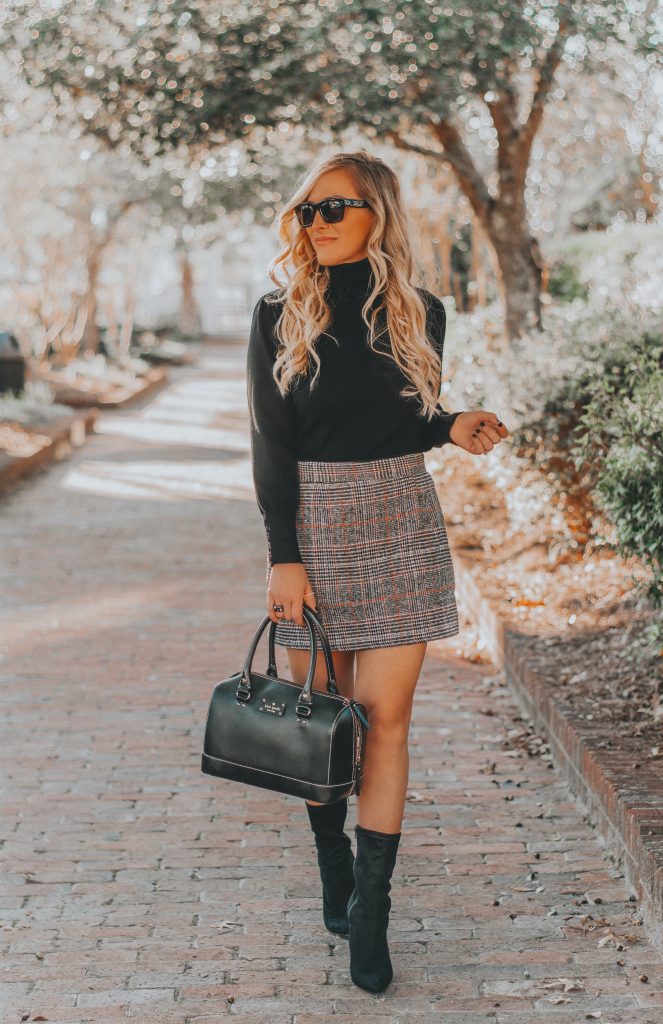 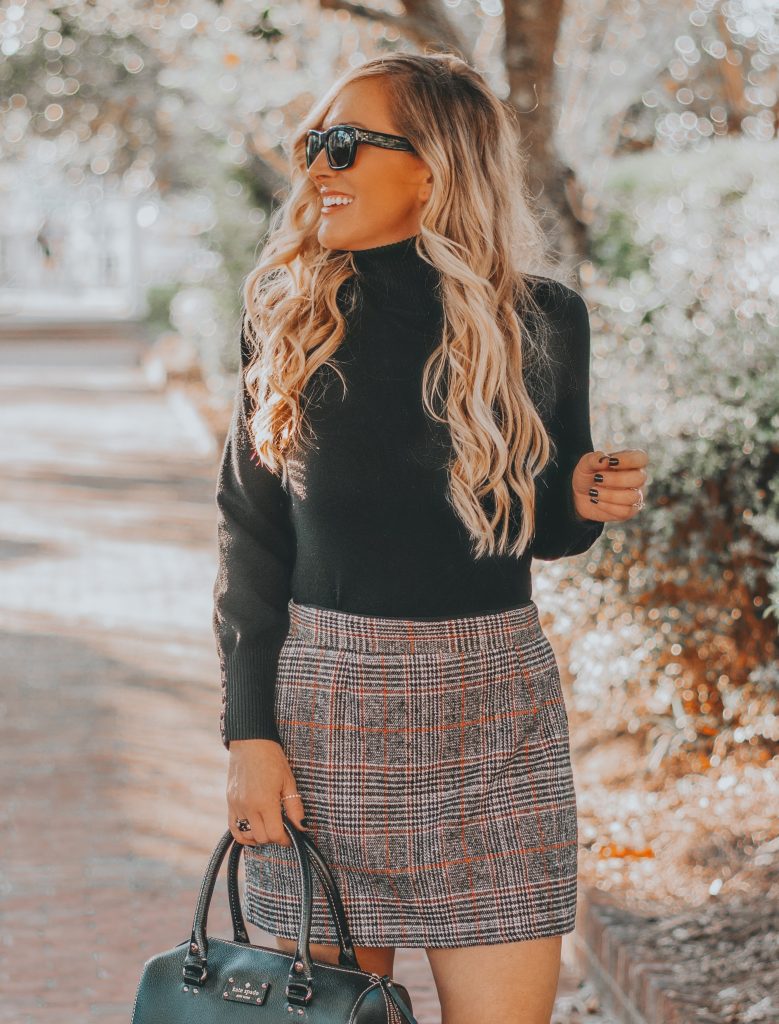 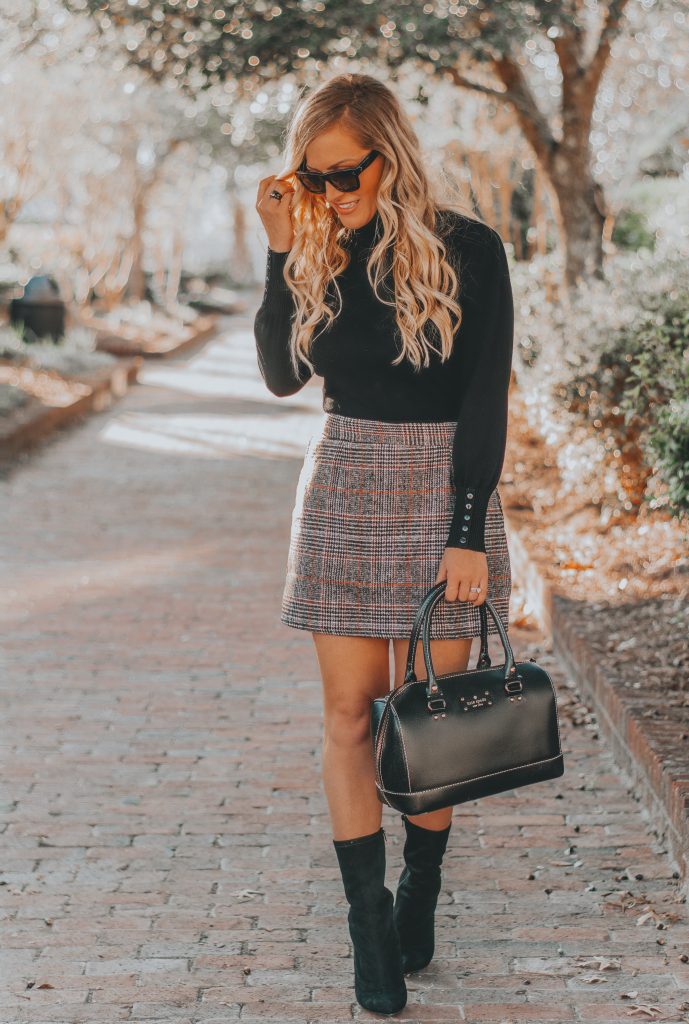 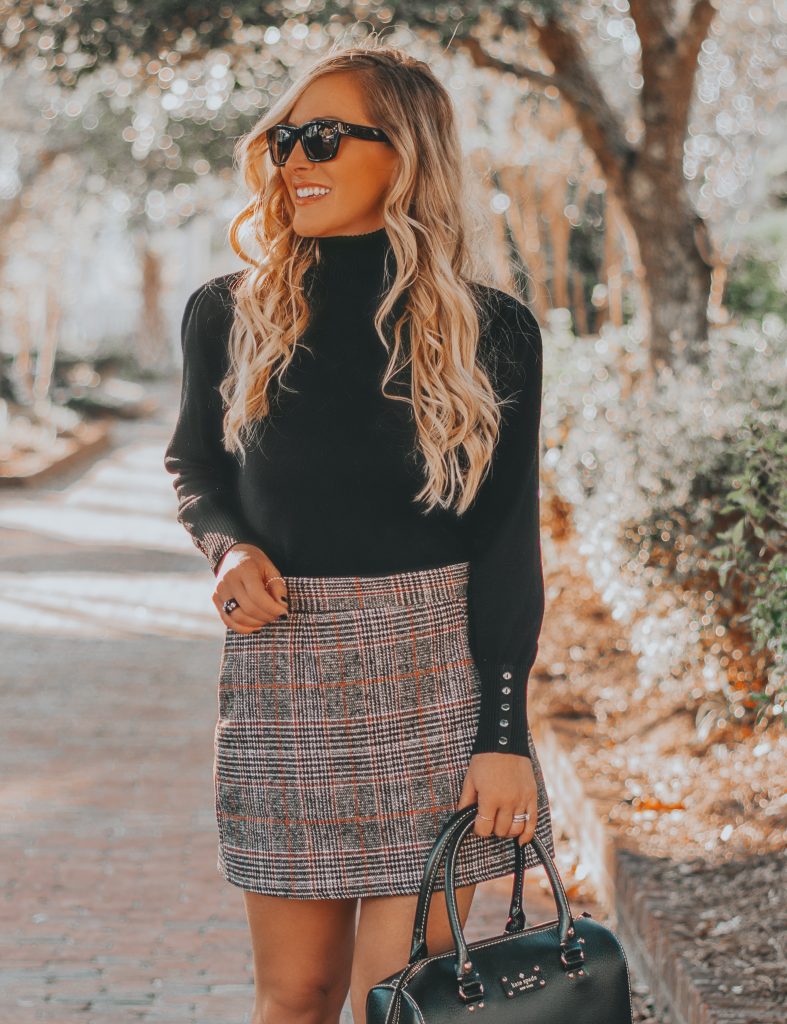 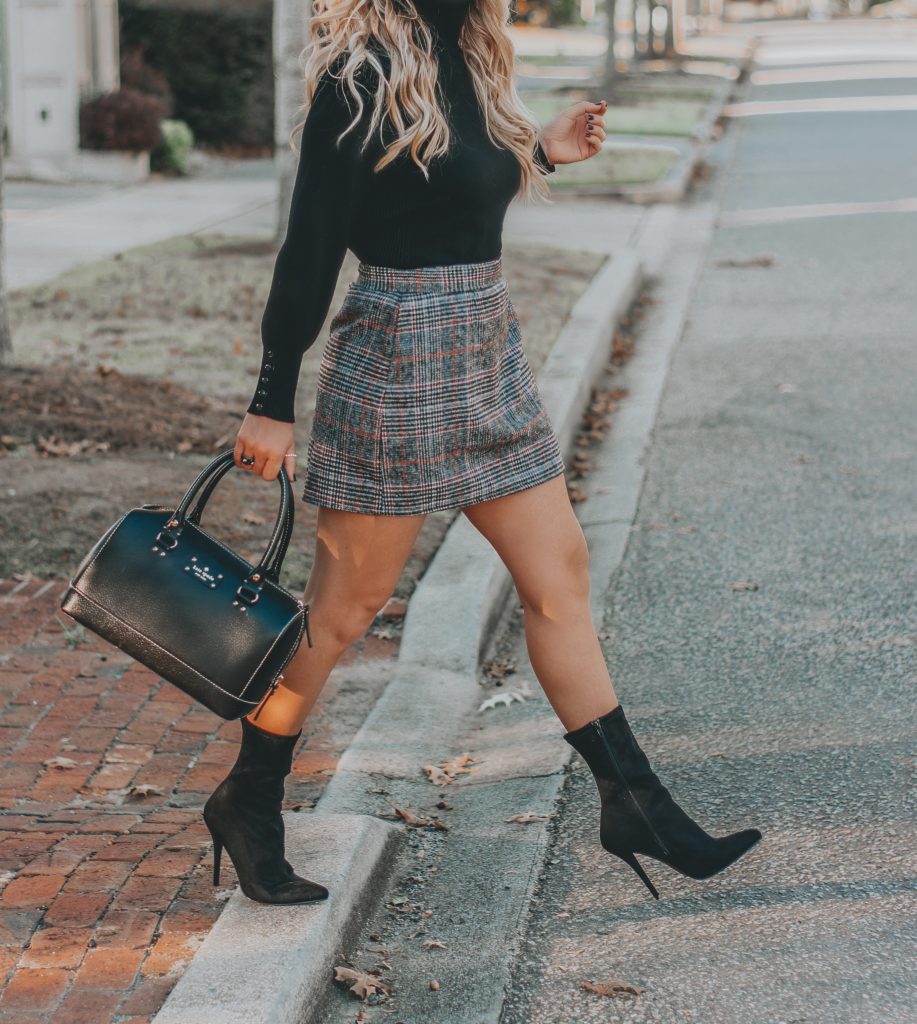 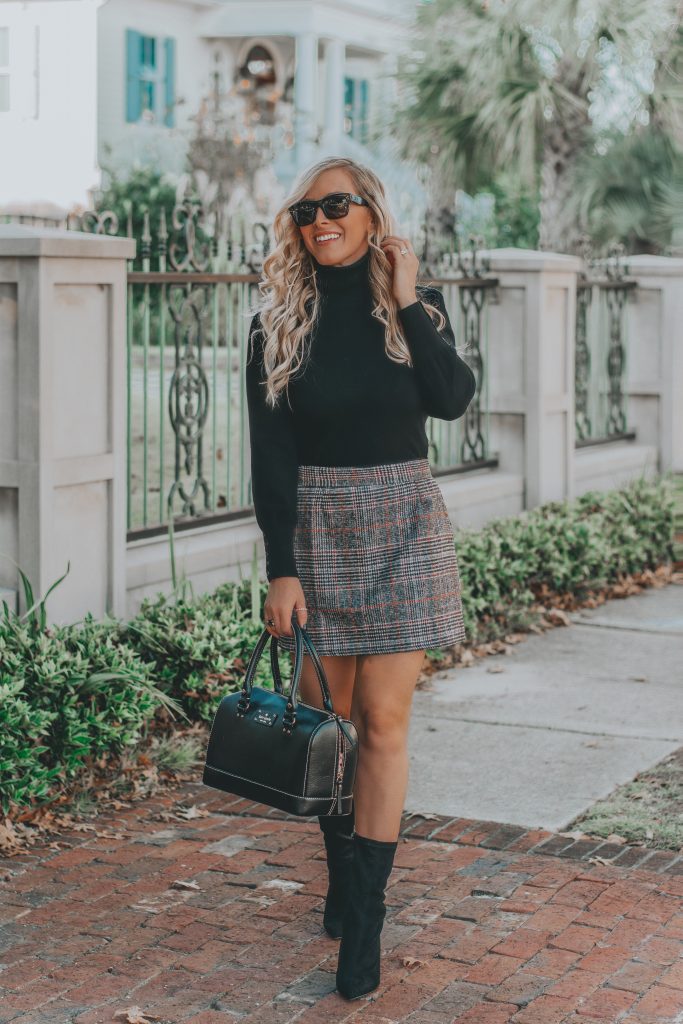 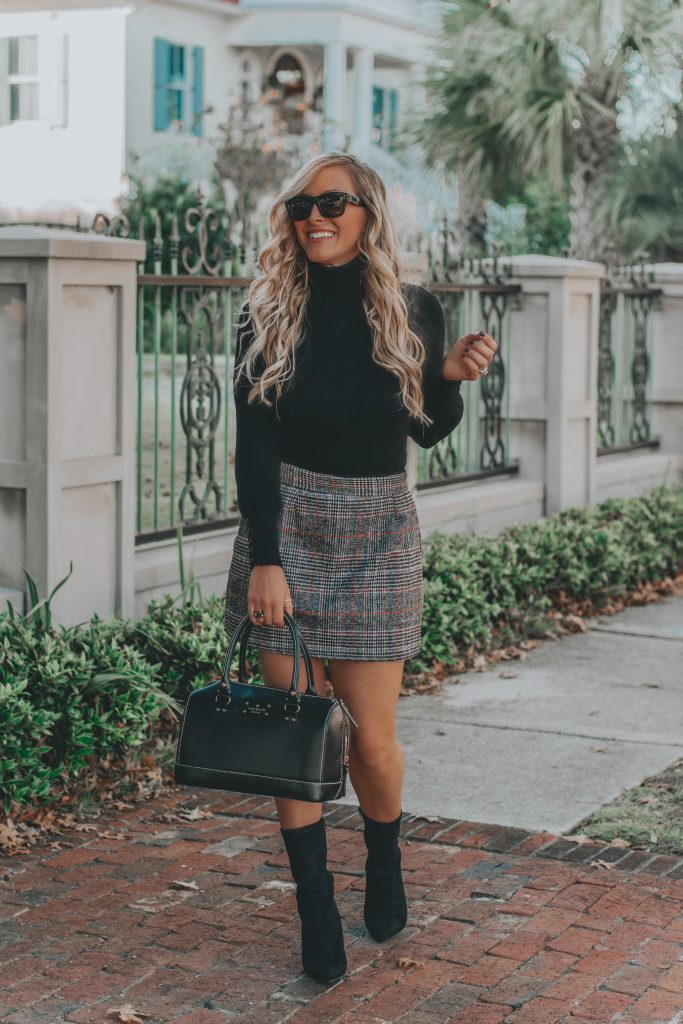 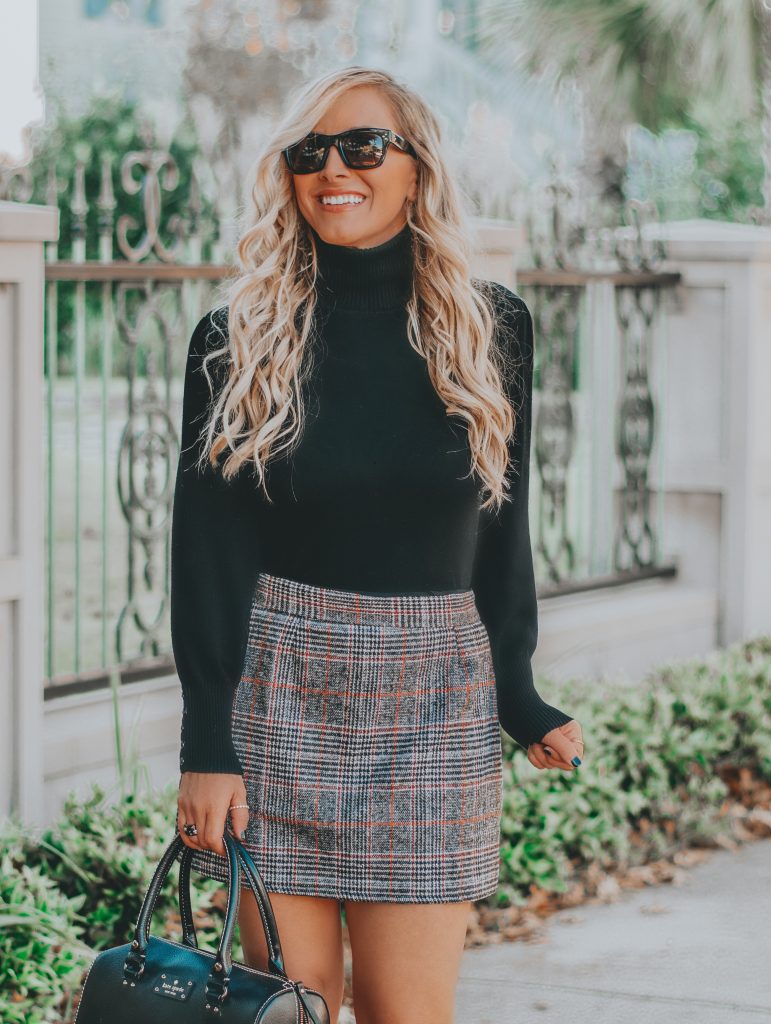 So really, this post is going to include two of my favorite fall staples, but that would have been a really long post title.

Now on to business…

This Prince of Wales check skirt is a recent buy, and I’m not sure why I don’t already have one of these sassy little numbers in my wardrobe cuz I’m in love, and my hubby (who typically doesn’t have much to say about what I’m wearing) is a big fan too.  My skirt only ran me an unbelievable $13, and the quality is great.  I mean it’s not Valentino or anything, but it’s not going to disappoint (unless of course you’re expecting luxury level craftsmanship for $13).  I’ve linked some others for those who are looking for pieces that are a bit more spendy.

I put together a pretty basic look here, but there are so many ways you could wear this skirt.  Pair it with an oversized sweater (maybe off the shoulder?) and some ballet flats or loafers.  Add fishnets or plain black tights and throw on a pair of biker boots and a leather or suede jacket for an edgy look.  Pair it with a crisp white oxford, and maybe layer it with a black v-neck sweater or throw on a blazer, add black tights, and some classic pumps for a more profesh look (just make sure it’s not too short on you if you do decide to wear it on the job;)).  It would even look super cute with a band tee, white sneaks (converse or golden goose anybody?) and a distressed denim jacket.  You get it….it’s a versatile piece;)

My other favorite fall staple (winter too, actually) are these black stiletto booties.  If you’ve just followed the link, you know that they’re out of stock in all the ‘normal’ sizes, but I’ve linked some others for you all.  I feel like every woman who wears heels needs a pair of these booties in her closet.  They’re extremely chic and flattering, and they look great paired with dresses, skirts, dressy shorts, skinny jeans, bootcut jeans, fit & flare jeans.  You get the gist.  Another very versatile addition to any shoe collection.

If you’re not big on stilettos, these Steve Madden Reece sock booties are a great option.  Here’s another similar (budget friendly) pair from Forever 21.

I probably wouldn’t have worn a skirt like this a year ago because I was about 15 pounds overweight, which is actually a lot on a 5’3′ frame.  I worked out and watched what I was eating (trying all sorts of fad diets), but nothing seemed to be putting a dent in that 10-15 pounds.

About four years ago I had lost this same stubborn weight shockingly easily with the help of the weight watchers app.  This was during their Points Plus era, but after I got back down to my goal weight they switched to a new point system, which I didn’t care for.  All the foods I had grown accustomed to eating regularly were now a much higher point value, so I canceled my app subscription and decided to try to maintain the same eating habits on my own.  This worked for a while, but then I had a back injury which essentially halted all exercising for over a year and required epidural injections, followed by bilateral foot surgery, which took several months of recovery (and also resulted in the creation of Bree At Last;)).

Yada yada yada, that extra 10-15 pounds slowly crept back on me.

This past May my good friend who turned me on to the weight watchers app several years ago, had decided to give it another go and told me how great their current points system is.  I decided to give it another try too, and in just over a month I lost 10 of the stubborn pounds I had been so desperate to shed.  And just like the first time I tried weight watchers, it totally didn’t feel like I was dieting this time around either.

I’m planning to do a more in depth post on this topic, but mainly I just wanted to share the zero point foods I’ve essentially been living off of over the past six months. 😉

Again, all the above foods are zero points, no matter the quantity you consume.  So on many days the only points I consume are the few from the olive oil I use for cooking, or ponzu sauce, which I find myself putting on almost everything.  For my height and weight loss goal, the app allotted me 28 points a day, and I’ve found it super easy to stay under 28 points without starving myself.

When we were in Scotland this past April (before I started weight watchers) I got really used to eating the traditional Scottish breakfast (minus the pork….I stopped eating pork over a year ago).  Their traditional breakfast includes baked beans, which probably seems odd to most Americans, but beans are so filling, so it’s actually a great way to fuel up for the day (vs. having a bowl of oatmeal or cereal only to find yourself starving in a couple hours).  I don’t eat baked beans for breakfast now, but since I’m a huge fan of eggs with a Mexican flair, I began adding a side of fat free refried beans with my egg scramble.

So my breakfast generally consists of two scrambled eggs with mushrooms, a whole bell pepper and whole onion diced, with a side of refried beans, and topped with salsa.  This gigantic breakfast is only about four points, which is from the olive oil used for cooking.  By adding the beans, I feel pretty stuffed throughout the day, so I end up only eating two big meals a day (breakfast and dinner), and then I snack on grapes like it’s my job.  I basically eat a giant bunch of grapes every day.  Sometimes more.  Not even because I’m hungry, but more so because they’re so freaking good.

Whenever grapes aren’t enough to satisfy my sweet tooth I’ll “indulge” in a pint of Caramel Sea Salt Halo Top ice cream, which is only 10 points for the whole pint.  Not bad at all;)

One of my favorite meals that we usually have about once a week consists of a sizable fresh salmon fillet, sea scallops, and asparagus, which is a fancier night for us.  All of this is zero points, aside from the butter Michael uses for cooking the salmon and scallops.  One whole tablespoon of butter is five points, and I doubt I consume an entire tablespoon of it when it’s used for cooking, but I always over estimate when tracking my points and still rarely end up consuming over 15 points a day.

If you watch my stories regularly, you know I LOVE my sweets (I’m the weirdo who always wants that corner slice of cake because of all the extra frosting), so I end up breaking my diet about once a week with a bag of gummy worms or the really good strawberry licorice they sell in the check out line at Lowe’s.  If I didn’t have these little slip ups, I’d probably lose more, but for now I’m happily maintaining my 10-12 pound weight loss.  We also had that Mexico vacay in late July where I gained 12 pounds in six days, which was thankfully mostly water weight, but all the indulging I did on that trip definitely put a halt to any additional weight loss since.  And thankfully I lost that 12 pounds pretty quickly after my trip simply by returning to my weight watchers routine.

I have quite a bit of muscle from years of gymnastics, cheerleading, dancing, competitive weightlifting etc, so I don’t really know what a normal weight for my build is at 5’3″, but my ultimate goal weight is 125 lbs, which is where I was through most of my mid to late 20s (Michael and I were married when I was 29, and the extra weight packed on slowly after we got married and moved to Denver).  125 looks pretty thin on me, but I like the idea of a buffer for when I scarf down a bag of gummies.  Currently, I’m hovering comfortably between 131-133lbs, and I workout (mostly spin classes) three or four times a week, which has been my consistent workout regimen since around April 2017 after recovering from my foot surgery.

I’ll touch on this topic more in the future, but thought I’d pop on here just to talk a bit about what has worked for me when everything else failed (e.g. expensive shake diets, counting macros, multiple whole 30 challenges, counting calories in my fitness pal, etc etc).  Especially with the holiday feeding frenzy around the corner.

The thing I love most about weight watchers is that I’m never hungry because I seriously eat as much as I want, whenever I want, until I’m full.  So it hardly feels like a diet.  Also, the app is so easy to use with the barcode scanning feature to track your points.

I also want to be clear that I am in no way working with weight watchers.  I just always want to share my personal life hacks with you guys, and this one has worked for me like a breeze twice now.  I should’ve stuck with weight watchers after the first time I tried it, but we live and learn  ¯\_(ツ)_/¯

Have any of you all had similar luck with weight watchers?  I’d love to hear some more success stories!