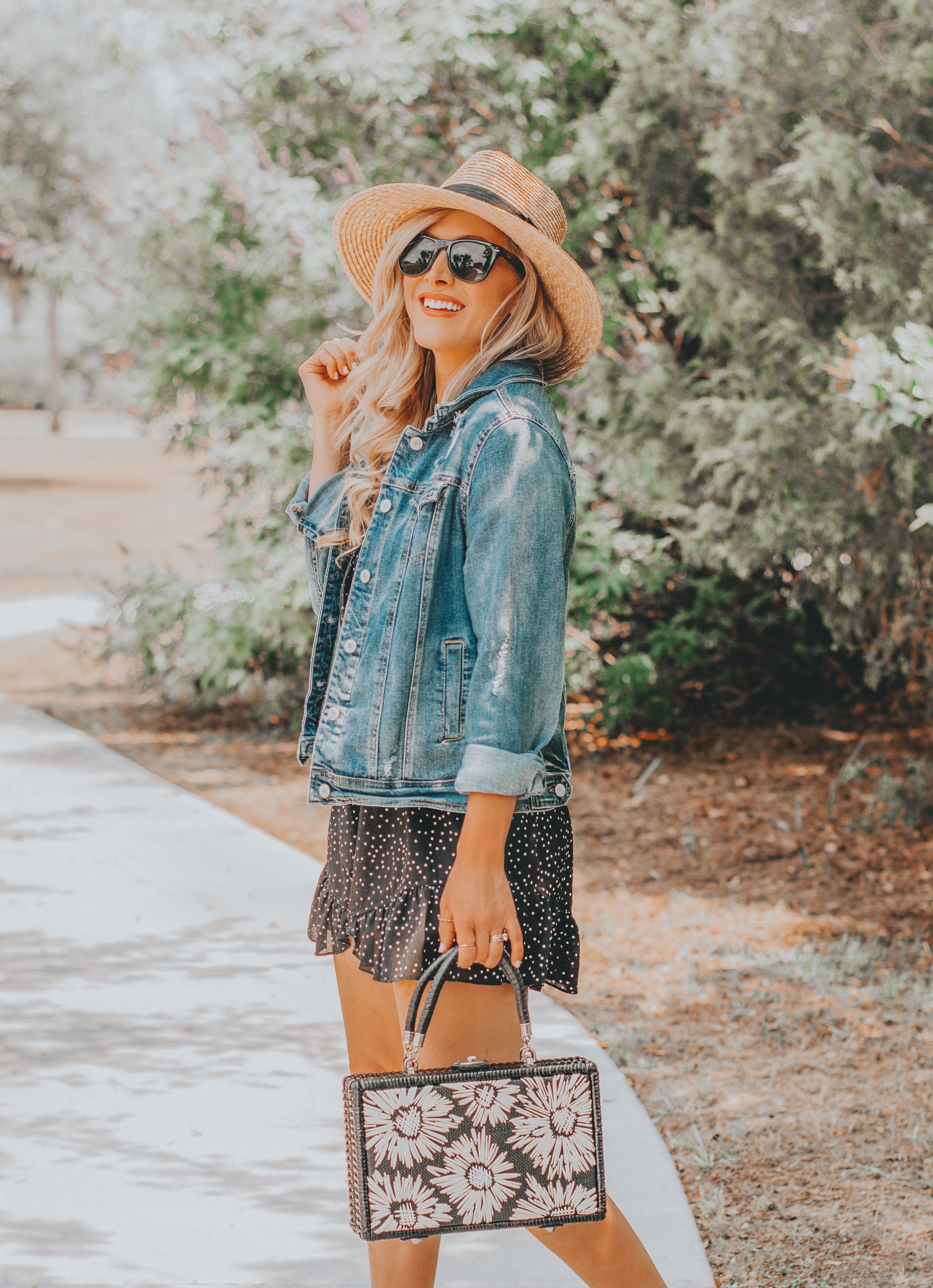 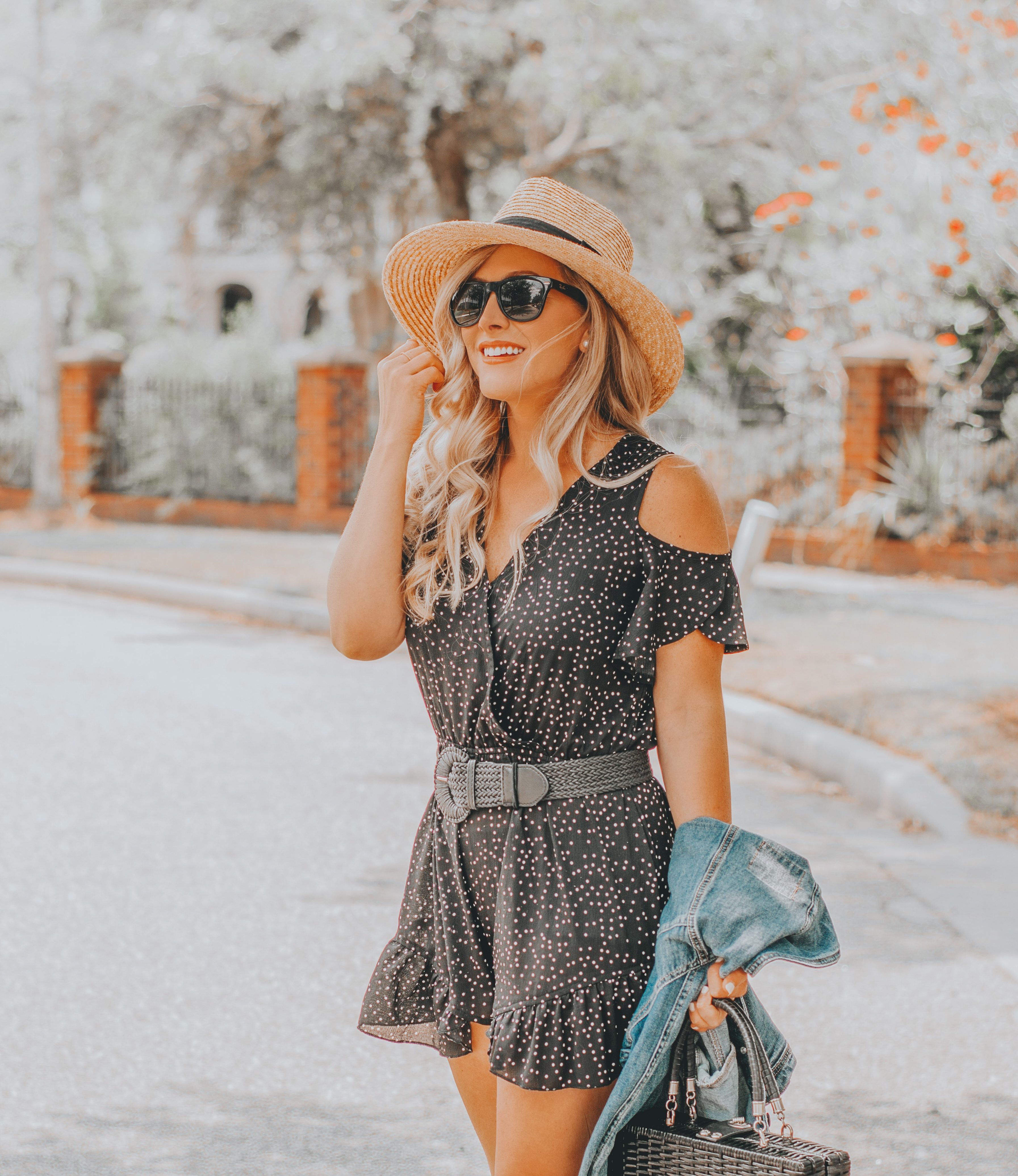 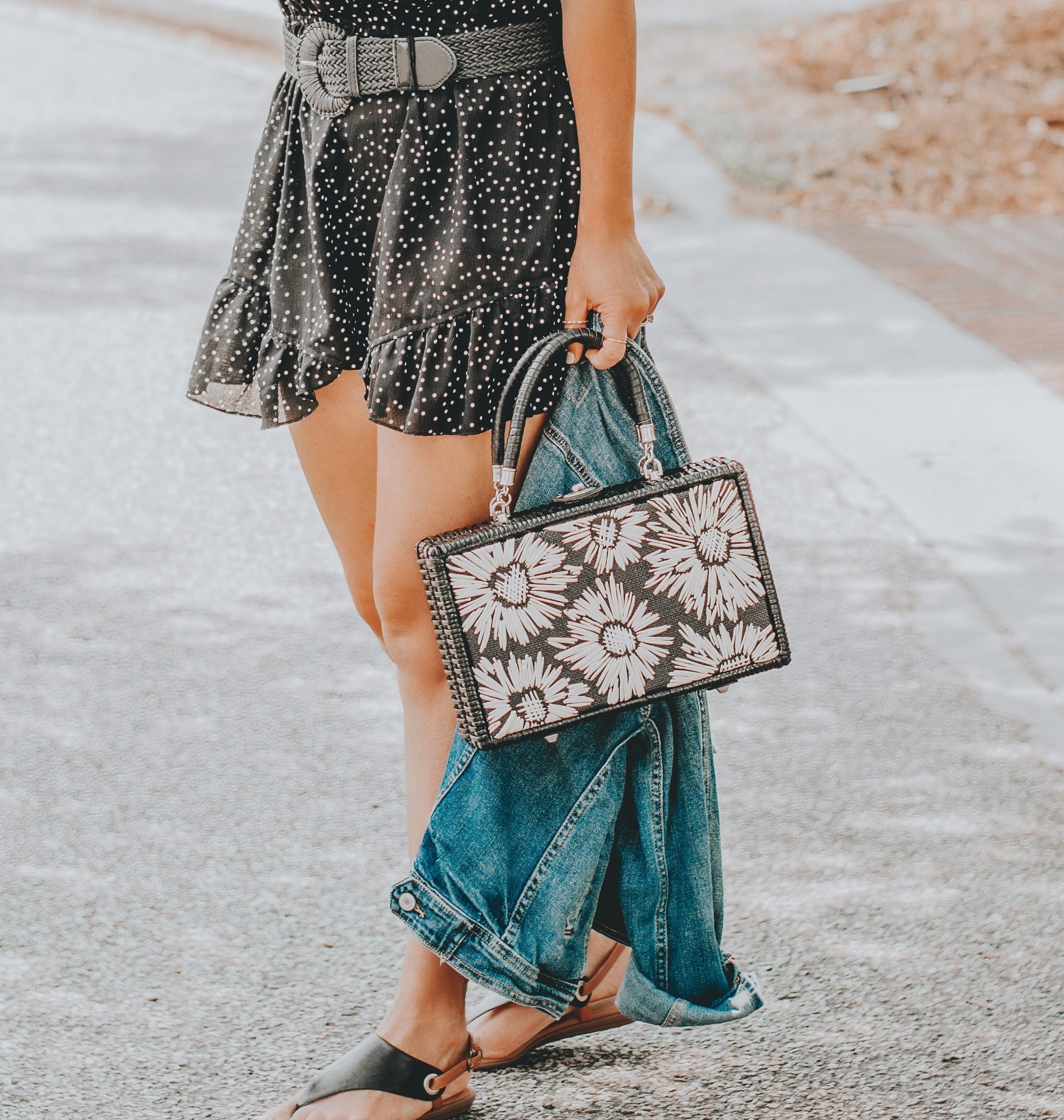 Oh my, it has been a week yall!!  But things are definitely on the upswing, thank goodness!

I’m sure a lot of you have seen the updates, or as I like to say “pupdates” on IG about our little black brindle frenchie, Gertie.  In case you’ve missed it, here’s a timeline of our multi-day saga (and peep my budget friendly romper above;)):

**Update: just noticed my romper is sold out…..whaaahhhh!!  Sorry guys!  It’s still available in a size small in the yellow, and hopefully they’ll restock the the rest=\

We’ve basically been down this exact same road with our fawn/white frenchie, Gracie.  I was on a cruise a few years ago and Michael was home with the dogs.  She broke out in hives Friday night, which is not normal for her, so he took her to the emergency vet in case her airway was impacted by whatever was causing the reaction.  They treated the hives with steroids, which had temporarily masked her disc issue.  She was okay Saturday, and then Sunday she started screaming in pain when she stood on her hind legs to beg to get on Michael’s lap, and then started pooping herself, so he rushed her back to the emergency vet and had surgery Monday.  Gracie made a full recovery, so hopefully Gertie will have good luck too.

My thoughts on Pet Insurance

On a related side note: the running tab for this whole ordeal is now over $7,800, and this is the second frenchie we’ve had (out of four) that’s needed this surgery.  The only way we can afford it is because we listened to other frenchie owners when we got Gracie, who was our first frenchie, and got really good insurance.  Frenchies are generally just a giant, costly, pain in the butt to own, but I’ll probably never own another breed because I just love them to pieces.

There are a few great insurance plans out there, as well as some duds, so definitely read the fine print.  We have Healthy Paws insurance and they cover 90% of the treatment expenses (minus the exam fee) for any non pre-existing illnesses or accidents.  Healthy Paws has no lifetime, or per injury or illness limits, and we have a $100 annual deductible, which is usually met at the first appointment of the coverage year.

Amazingly when our late frenchie, Gilbert, was diagnosed with a congenital heart condition (mitral valve dysplasia) just after his second birthday, they still covered his treatment because the condition, even thought it was congenital, had gone undetected for two years.  In about two and a half months his cardiology bills totaled well over $10k, and they covered all. of. it, so we only had to foot 10% plus some exam fees.  They even reimbursed me for some over the counter meds that he needed.  Gilbert was actually doing really well when he died after getting too excited about a toy I brought home for Gracie on her birthday.  His heart was susceptible to irregular rhythms called premature ventricular complexes (or PVCs), so his cardiologist feels that he likely threw a PVC and was unable to recover from it.  I don’t regret treating him for his condition because he was feeling great when he left us.  Gilbert had been rescued from a puppy mill, so I’m also so thankful he wasn’t drowning in untreated congestive heart failure as a stud dog in some horrifying midwest commercial breeding operation.

Wow….I’m getting way off track here (I tend to do that a lot…sorry!), but my point is I cannot tell you what a relief it is to be able to medically treat our dogs the way they deserve without really giving the cost of the treatment a second thought.  A lot of pet owners are forced to have to surrender their pets to rescues so they can receive proper treatments, or make the tough call to send them over the bridge, and that’s a really crappy place to be.  Being in oodles of credit card debt from going forward with costly treatment isn’t ideal either.  A lot of people think that pet insurance is a scam, but I’m here to tell you it absolutely isn’t…you just have to make sure you do your research and find a reputable company.  Every year we’ve come out ahead with our plan, meaning they’ve reimbursed us for a greater amount than a year’s worth of our monthly premium costs.

We typically average one surgery, or one emergency situation per year with one of our three dogs, unfortunately, and usually just that one ordeal turns out to be more costly than what we spend on a year’s worth of monthly premiums for all three dogs.

When we purchased insurance, we truly didn’t think we’d use it much, but wanted to have it for when they’re all older, and heaven forbid come down with a cancer diagnosis, or some other condition that’s costly to treat.  But in four years our insurance has covered these major issues:

So in four years Healthy Paws has paid out well over $34k in reimbursements since we started the policy in May 2015, which probably sounds crazy because most people I know don’t have to spend that kind of money on their pet(s), but usually that’s because the option of doing so just isn’t there.  Or doctors never even get to the point of explaining these sort of costly, and more advanced treatment options because the average pet owner thinks it’s a ridiculous investment and make the decision to end their suffering, or keep them as comfortable as possible, as cheaply as possible, for however long the pet has.  I totally get this reality.  Especially for those who have kids to put through college.

I know our dogs are more high maintenance than the average lab or terrier mix, but we have a friend who rescued a lab mix puppy last year and Michael urged him to insure the puppy.  Michael explained that it’s really a no brainer if you only have one dog, as the monthly cost of insurance is minimal in that case.  Within a few months the puppy ate one of its toys, which obstructed the bowels, so it had to have surgery to remove it.  He was so thankful to have that policy in place already. ¯\_(ツ)_/¯

If anyone has any questions about our experience with our pet insurance, please reach out!  Or if you’re thinking about getting your first frenchie, definitely reach out!  I know of some great frenchie rescues around the country. 🙂

HUGE thank you to everyone who’s reached out and shown Gertie all the love while she’s going through this ordeal.  We really appreciate it!